The Olomouc Holy Trinity Column is an appropriate culmination to the allegorical program of the city’s Baroque fountains, its symbolism complementing and completing it. At the time of its creation in 1716-1754, the column was among the last examples of the pestilential, Marian, and honorary columns of the Baroque era, but his artistic conception, rich figurative decorations, and sheer size make it significantly different from all similar monuments. In 2000, the monument was registered as a UNESCO World Heritage Site.

The famous consecration of the column, undertaken by Olomouc Archbishop Cardinal Julius Troyer, marked the completion of its construction, which had gone on for decades and which was frequently dogged by misfortune. Not even its initiator, Wenzel Render, survived the work, having had to overcome a number of obstacles even before the construction even began. The determined location for the fountain was located on a site where an older Hercules Fountain had once stood, and even a part of the municipal guardhouse building was an obstacle. Render initially had to move the first fountain at his own expense, and only then could he install the foundations for the column, over two meters deep and occupying an area of about 200 m2.

In the first stage until Render’s death in 1733, the structure was built only up to the first floor with the inner chapel. As for the sculptural decorations, six reliefs with busts of the apostles were completed on the mantle chapel, as was its interior decoration.

After Render’s death, the stone masters František Thoneck, Jan Wenceslas Rokický and later his son Jan Ignác Rokický continued to build the column. The main source of funding for the construction was the estate of Wenceslas Render, who had bequeathed his entire fortune for this purpose, amounting to nearly eleven thousand guilders. The first few years of work continued seamlessly, but war and the invasion of Prussian troops in 1741 presented the first significant delay. Work continued again from 1745, when a new contract with stonemason Augustin Scholz and sculptor Ondřej Zahner was closed. At the beginning of the 1750’s, the top group of the Trinity with Archangel Michael and the sculpture of the Assumption was hammered from a copper sheet and heavily gilded by Olomouc goldsmith Šimon Forstner. In May of 1754 the work was completed, and the consecration took place on September 9, 1754.

At roughly a third of the height of the main stem of the column, a group of the Assumption of the Virgin Mary rises upwards, with Mary lifted by a pair of angels.

The protagonists of the lower stage are two martyrs as well as the national patrons St. Maurice as a patron of Austria, and Prince Wenceslas, “the heir to the Czech lands.” This stage also includes a statue of St. Florian, protector from fire, who also represents the water element, otherwise missing on the column and characteristic to all the other outdoor sculptural monuments in Olomouc. 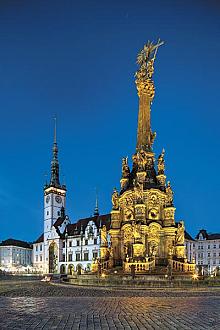 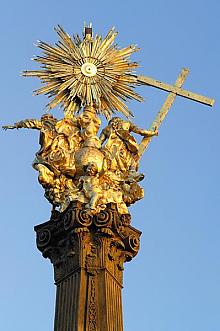 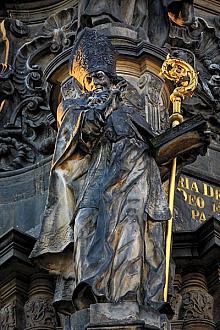