The dominant feature of the Lower Square is the Baroque turned Marian Column with the statue of the Virgin Mary on top. It was completed by a collaboration of the agile stonemason Wenzel Render, sculptor Tobiáš Schütz, and Jan Sturmer in 1724 to express the gratitude of the townspeople Olomouc for averting the plague that struck Moravia in 1714-1716. The Capuchins who came to Olomouc at the invitation of Bishop Dietrichstein in 1615 were permitted to build their own monastic Church of the Annunciation after the Thirty Years War. In 1655-1661, in the spirit of strict monastic rules, they built a simple temple that still stands with its buoyant triangular gable and dominates the entire southern side of the Lower Square. The nearby single-nave Gothic Church of St. Catherine on Kateřinská Street, from the third quarter of the 14th century, originally belonged to the adjacent Dominican Convent (later Ursuline). One of its most valuable architectural elements is the five-part vaulting of the rectangular end of the chorus and the stepped entrance portal with high pointed arch. The former monastery represents an almost completely intact preserved complex of two-story buildings grouped around two internal courtyards. Their walls have partially preserved remnants of the old Renaissance buildings, but the current building dates from the Baroque period after a fire in 1709. One of the wings of the convent directed towards Křivá Street was added later, during the 19th century. 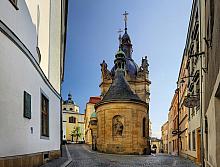