THE FOUNTAINS OF OLOMOUC

Returning from Kateřinská Street towards the city hall, we pass two city fountains named Jupiter and Neptune. Since these monuments are part of the historical set of fountains based on a single mythological concept, we can discuss them together with the other fountains.

The legend of the founding of the city at the dawn of the modern period has a well-known artistic expression, specifically the Renaissance Caesar Fountain, today no longer existent, from the 1540’s. It stood between the city hall and the beginning of Ostružnická Street on the Upper Square.

At the turn of the 17th and 18th centuries, the foot of the legendary Michael Hillock was loosely surrounded by six fountains bearing figures of Neptune, Hercules, the Tritons, Caesar, Mercury, and Jupiter. The first built was the fountain on the Lower Square in 1683 of the Greek god of water, Neptune, surrounded by four sea horses.

The second fountain followed in 1687 with the Hercules Fountain on the Upper Square. This legendary hero, with the checkered Olomouc eagle in his left hand, was symbolically presented as the city’s protector, defeating the enemy attacks of the Hydra at his feet with his mighty cudgel. It was later moved to its current location before the northern facade of city hall in 1716 by Wenceslas Render, who needed the space for the planned Holy Trinity Column.

For the following Florian Fountain on the Lower Square, Render showed his skills as a figural sculptor and added a simple stone basin and a relief decorated pedestal as well as his own statue of St. Florian, the popular protector from fires and floods. The fountain was completed in 1707, but remained in its original form for less than twenty years. The Christian St. Florian was replaced in 1735 by a statue of Jupiter, the ruler of ancient Roman gods.

Render’s original statue of St. Florian was moved to the courtyard of the municipal estate in Skrbeň, where it stands today. This might have been done for reasons of simple prestige, when at that same time the Premonstrates in the Hradisko Monastery were preparing an equally ambitious project to build the Saturn Fountain for the courtyard of the newly completed prelature. The central statue of Saturn as Chronos, the god of time, bearing the attributes of scythe and mirror, is supplemented by the two Old Testament heroes Samson and Gideon as allegories of day and night.

From an unknown sculptor, we have the richest composition so far with a pair of water bearers and dolphins, together holding a stone shell on the Triton Fountain. A figure of a boy emerges from the shell holding a pair of water dogs.

Wenceslas Render was equally fortunate with his selection of sculptor for the Caesar Fountain. He invited the talented youngster Johann Georg Schauberger for collaboration in its creation; the admirable result of statues opened the way for Schauberger into membership in the Olomouc sculpture’s guild. The figure of Caesar is looking from horseback with a confident gesture onto Michael’s Hillock, where at the time of the sculpture’s creation stood the “Pagan” or Julius Tower (Turris Iulia), a remnant of an ancient courtyard where the Emperor’s abode was once believed to have stood. The composition of the fountain is supplemented by figures of the river gods Morava and Danubia with the province symbols of Moravia and Lower Austria, and a figure of a sitting dog as a symbol of Olomouc’s loyalty to the emperor. This monumental work was completed on the feast of the patron of “Julius Hill” of St. Michael on September 29, 1725.

The symbolism of the last of the Baroque fountains, the Mercury Fountain from 1727, has a loose connection to St. Michael, the heavenly protector. As the messenger for the gods, Mercury (Greek Hermes) played a similar role in classical tradition as did the victorious Archangel Michael of the Old Testament – he was also the guide for the souls of the dead and the interpreter of God’s will. In the sculpture by Filip Sattler, he is traditionally fitted with a gilded herald’s staff (the Roman caduceus). From an artistic perspective, the sandstone statue is the most interesting work of the entire collection of the Olomouc fountain statues.

Pravou The true crown of the city’s public decoration, however, was to become the seventh fountain, Arion, the chosen location for which was the particularly prestigious spot in front of the southwest corner of the city hall. Like with the older fountains, the people of Olomouc wished to draw inspiration from classical legend; this time about the renowned Greek poet, singer, and kithara player Arion, who lived at the turn of the 7th and 6th centuries BC. In other literary and artistic traditions, Arion’s character was seen as a living example of rectified injustice and rescue from destruction. This was probably how the Olomouc townspeople saw it as well, especially those who witnessed the grievous humiliation of their city after the Thirty Years War – the loss of its statute as the capital of Moravia and its later transformation into a military border fortress, together with additional restrictions to its autonomous government. The planned fountain was supposed to announce henceforth to all visitors to the city, namely to the sovereign directly upon his entrance to the main Olomouc square, that a city with such a glorious past and merit can not be humiliated further and deprived of its rightful privileges. The intention of the city’s distant predecessors were finally realized by the Olomouc city council after 1989. The order to build a seventh city fountain depicting Arion’s story became part of the building program of the reconstruction of the Upper Square, prepared from 1995. Such an eloquent gesture was also intended as a new confirmation of the city’s efforts towards the comprehensive renovation of the city, more recently robbed of its own cultural and historical identity by the totalitarian regime of the later 20th century. The city council invited the native Olomouc sculptor Ivan Theimer to carry out the work in collaboration with the Tuscan architect Angela Chiantelli. 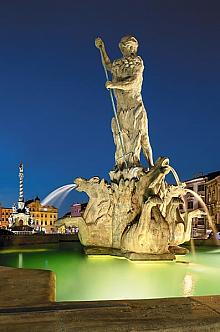 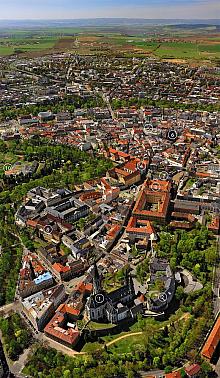 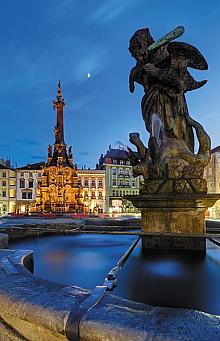 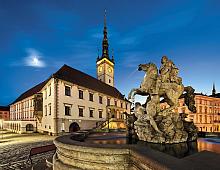 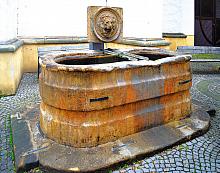