The famous Olomouc Astronomical Clock adorns the northern facade of the city hall. Its architectural outline consists of a niche with a pointed arch reaching nearly 14 meters high. The quaint appearance of today’s clock does not resemble its ancient history or its artistic and scientific value in any way; the same applies to its moving figures, which in the past were richly decorative and attracted attention by their musical accompaniment and colorfulness.

The first undisputed mention of the existence of the clock comes to us from 1519. The original clock, the appearance of which is unknown, was “restored and improved” during the first major renovation in 1573-1575. At the time, the astronomical clock displayed the medieval concept of the cosmic order, closed into a Gothic side altar with paintings and sculptures. Moving figurines, together with drums and musical arrangements, were combined with paintings on wood panels.

The clock, like the city itself, just barely outlasted the Thirty Years War. The clock underwent modifications again in 1661-1662. This included an enrichment of the clock’s painting with the inclusion of wall murals depicting the Seven Liberal Arts on the inner walls of the niche. The lower part of the clock still bore Fabricius’ pointing targets with four smaller indicators on the sides. Their faces indicated quarter hours, full hours, the planets and the signs of the day, plus the “unequal hours”. On the lower calendar, an angel showed the day of the year. The central part of the clock held a glockenspiel, above which was a royal portrait while the very top bore a semi-recumbent sculpture of the goddess Luna. The side “wings” of the clock were enlivened by groups of mechanical puppets. On the left stood St. Wenceslas, with St. George on horseback chasing a dragon around him. Above them, a monk tended a rosary in his hand at the chime of the hour, and a hermit pulled the bell. The right side displayed the Madonna and Child, adorned by the circling Three Kings. Above the group, a Renaissance cavalier accompanied by a bugler served as bell ringer.

The last major renovation of the astronomical clock in its original form, based on the belief that the sun and planets rotated around the earth, was in 1746-1747. This was the work of a clockmaker, organist, and so far the most important known artist of the clock’s decorations, the Olomouc Baroque painter Jan Kryštof Handke. On the lower front face, Handke confidently painted a watchmaker and a painter as the two main originators of the entire work; we can safely consider these to be the master’s self-portrait.

In 1800, the clock stopped for eleven years, then after temporary repairs stood still again until 1898. At this point, during the peak of the period of historicist architecture, the clock gained its romantic appearance, which significantly disrupted its artistic and technical originality for the first time. The new clock, executed by the company of Eduard Korfhage, now showed a planetary system based on the heliocentric system of orbits.

The final and complete erasure of the clock’s remaining historical value as an artistic monument, however, was brought about by Karel Svolinský in 1947-1955. The clock was allegedly destroyed at the end of the Second World War, but not nearly as badly as the astronomical clock in Prague. Either way, the clock, located on what was known as Stalin Square at the time, brightened the gloomy 1950’s with its idyll of the favorite Russian children’s character Neználek (Dunno) in his Sun City, but now populated with joyous workers, athletes, and farmers. Even though in his youth Svolinský was a promising and sovereign carver of puppets, the clock’s moving figures were carved by his wife Marie. The glass mosaics with the themes Ride of the Kings, Procession of Maidens, Laborer, Chemist, and allegory of the twelve months were added by the Česká Mozaika national enterprise in Nový Bor based on Svolinský’s drawings. 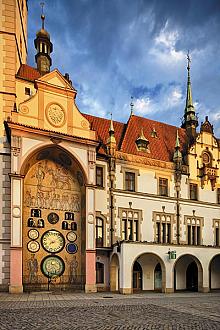 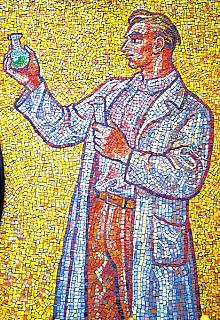 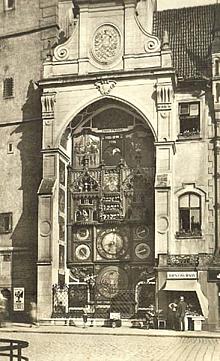