The area before the castle known as “Olomoucké Předhradí”, demarcated by the streets Wurmova, Křížkovského, třída 1. Máje and Republic Square, is primarily an enclave of Baroque canon residences dominated by the Archbishop’s Palace in the axis of Bishop’s Square. The older Renaissance building from the period of Joannes Dubravius was fundamentally rebuilt by Bishop Karel of Lichtenstein-Castelcorn immediately after taking office in 1664. The original plans of architect Filiberto Luchese from 1667-1685 were drawn upon directly by another Italian in the Bishop’s service, Giovanni Pietro Tencalla, who designed his own facade with an emphasis on the middle portal, above which was built a balcony with balustrade modeled on Rome’s Palazzo Farnese.

TIP: you can visit the restored Archbishop’s Palace with a guide. Tours run daily (except Mondays) from May to September from 10 am to 5 pm, in April and October only on weekends. Groups can arrange individual visits.
www.arcibiskupskypalac.cz

Church of Our Lady of the Snows

On the way from the Archbishop’s Palace towards the center, we pass the Triton Fountain on Republic Square. This will be described in more detail in the separate section covering the Baroque fountains of Olomouc. The facade of the Jesuit Church of Our Lady of the Snows at the western end of the square is a rare example of dynamic Baroque architecture in Olomouc. It is the joint work of designer Michael Joseph Klein from Silesia, the local builder Lukáš Kleckel, stonemason Wenceslas Render as the author of the portico with twisted columns, and sculptor David Zürn, whose workshop is responsible for the statues in the niches of the facade. The concept of the interior space with wide nave and two rows of side chapels is modelled after Rome’s Church of the Gesù. The church was built between 1712-1719 and became the dominant feature of the large Jesuit enclave.

The Jesuit buildings in Olomouc make up a large urban complex that extends from the Předhradí area (Republic Square) to the eastern foothills of Michael’s Hillock (Denisova and University streets, University Square). It consists of a set of high Baroque buildings that include the Church of Our Lady of the Snows, the college (1718-1722), school building (1701-1708), old and new “konvikt” boarding school (1660-1667 and 1721-1724), the seminary of St. Francis Xavier (1717-1720), and the Chapel of Corpus Christi. Construction on the oval layout, embedded between the school building of the old university and the Jesuit boarding school on Univerzitní Street in 1721-1724, is the work of Olomouc architect Jan Jakub Kniebandl. The spatial resolution of the interior is reminiscent of Bernini’s church of St. Andrew on Rome’s Quirinal Hill and stands out with its holistic approach to painting and sculptural decoration on the theme of the legendary victory of Jaroslav of Šternberk over the Cumans, which allegedly took place near Olomouc in 1241. The painters Johann Christoph Handke and Jan Drechsler also collaborated in the work together with sculptor Filip Sattler. 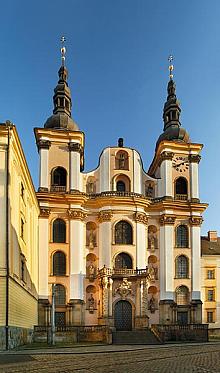 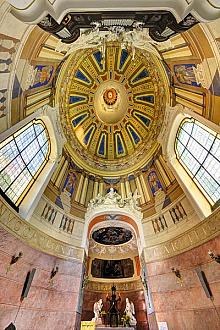