A stroll through the historic part of Olomouc shouldn’t begin anywhere else than in front of the St. Wenceslas Cathedral on Wenceslas Square. Construction of the future bishop’s cathedral was started before 1107 by the Olomouc Appanage Prince Svatopluk, whose son Wenceslas gave it over to Bishop Jindřich Zdík, still unfinished. Under Zdík’s patronage, the church was consecrated on June 30, 1131. From the original flat-ceilinged Romanesque basilica, the western twin towers (now concealed beneath a neo-Gothic cladding), the inaccessible crypt under the original apse, and the original three-nave floor plan are still preserved today. After a fire in 1204, the basilica was vaulted for the first time and fitted with the first row of external supports. Extensive early Gothic reconstruction took place after another fire in 1265 under Bishop Bruno of Schauenburg. This stage brought the perimeter walls of the three naves and high cathedral windows with post-classical tracery, a new pillar support system on a trapezoidal layout, and the inner supporting shafts beneath the arches. Fragments of their plastic headers are now kept in the lapidary of the Regional Museum in Olomouc. A smaller rectangular presbytery from this period was removed in the early 17th century. The three-nave cross vaults, still preserved today, were integrated into the structure in the first half of the 14th century under Bishop Jan Volk. The Renaissance enriched the church’s silhouette with a dominant central tower in the front (today non-existent) and the advanced architecture of the chapel of St. Stanislav on the southern façade (1585-1591) under Bishop Stanislav Pavlovský. Pavlovský’s successor Cardinal Francis of Dietrichstein gave the impetus for the construction of a new and unusually large barrel vaulted presbytery in 1616-1618, whose architect was probably the Italian Andrea Spezza, later one of the architects of the Wallenstein Palace in Prague. This was later followed by Classicist modifications under Johann Sarkander Thalher in 1803 which transformed the western facade of the tower into Empire style. The church’s final appearance with its characteristic high southern tower and opposite new choir chapel of Ss. Cyril and Methodius came in 1883-1892 an extensive renovation in historicist neo-Gothic style. The church’s layout thus achieved the symbolic shape of a Latin cross, expressing the idea of the intersection of two churches – old and new. Regothization came under the ideological leadership of Archbishop Friedrich von Fürstenberg with the architects Gustav Meretta and Richard Völkel who thoroughly reshaped the façade as inspired by the Paris Basilica of St. Clotilde.

The neo-Gothic altar holds a reliquary with the relics of St. John Sarkander. Beneath the cathedral’s chancel there is a crypt, open to the public, consisting of two floors – the lower crypt contains the coffins of the Olomouc bishops.

It was in this building that on August 4, 1306, the murder of the last Bohemian king from the House of Přemyslid, Wenceslas III (1289-1306) took place (see above). The murder likely took place on the site before today’s Baroque balcony in the north of the building.

The larger complex of the original Bishop’s basilica also included the buildings of the former Romanesque Bishop and Chapter House, formerly and inaccurately known as Přemyslid Palace. Although the building north of St. Wenceslas Cathedral has only partially been preserved in its original form, a recent exhaustive reconstruction is able to provide us with convincing testimony to the high level of Romanesque art culture in Moravia. The stylish purity, rich ornamental motifs, and skillful design of the sculptural relief decorations on the palace windows make them a unique example, outstanding among Central European architectural sculpture work. The palace was built in the 1140’s through the efforts of Jindřich Zdík, the first of many remarkable personalities in the Olomouc bishopric seats.

In 1137-1138, Zdík undertook an inspiring pilgrimage to the Holy Land. His journey resulted in his short-term affiliation with the Augustinian chapter at the Church of the Holy Sepulcher in Jerusalem which then inspired Zdík to reform the priestly choir of the Olomouc Church. In order for the chapter to actually live by such strict monastic rules, however, the appropriate conditions first needed to be created. The first of them was fulfilled by a foundation deed from 1141, in which the Chapter was granted land estates. The second, equally challenging, condition was undertaken by the Bishop even earlier, after he returned from his journey in 1139. This was the construction of a building that would provide a suitable dignified headquarters for the new cathedral’s twelve-member body of canons. Zdík’s freshly acquired sympathies to the monastic way of life also meant that the new construction would include a bishop’s house. Based on a stylistic analysis of the preserved parts of the building, it is now almost universally assumed that the master stonemason who was commissioned by Zdík for this work was brought to Olomouc from the Rhineland. In particular, the plastic decoration of the architectural elements of the imperial house in Speyer bears very similar ornamental motifs, even though they clearly date to an earlier era, to the end of the 11th century. The stone architecture of the Olomouc windows is based on subtle turned columns that bear dosserets on richly decorated anticizing capitals with rosettes, on them another layer of acanthus and geometric ornamentation. The front surface of the semicircular arches are covered by continuous strips of palm patterns. The elegant expanding arches above the windows, on the contrary, are smooth, providing even more contrast with the structure of the surrounding darker ashlar masonry. The Olomouc palace with its three wings around the main courtyard, the fourth (south) side of the building closed by the earlier basilica, was probably built in a relatively short period around 1141, when another official document confirmed the transfer of the bishopric to the Cathedral of St. Wenceslas. The needs of the chapter were mainly served by the entire eastern wing of the palace, which could have had a chapter hall on the ground floor and the shared bedroom of the canons upstairs, connected by a staircase as wide as the wall of the adjacent chorus of the neighboring basilica. The chapter also included a dining room with kitchen, which were probably located on the ground floor of the northern wing. A paradise garden with a fountain served for contemplation and rest, surrounded by a cloister whose unusual rectangular (instead of square) shape could have been necessitated by the lack of space on a relatively narrow tract of land. In addition to the entrance directly from inside the church, the chapter part of the palace was accessible from the western side through a ground floor portal which led to the area in front of the castle palace. Directly above this entrance there led an external staircase rising to a similar portal that led to the bishop’s residence, located in two halls on the first floor of the northern wing of the palace and which was also connected through a narrow wing to upper rooms of the western double-towered church. It was here that in 1867, the archbishop’s builder Karl Biefel accidentally discovered architectural elements of a Romanesque group of windows with rich relief decorations, which at first he considered to be a remnant of the old Přemyslid castle. Biefel’s successors, Josef Erwin Lippert and especially Gustav Meretta, later made the discovery partially accessible in the 19th century, continuing to reveal the windows beneath the low roofs of the Gothic cloister which was built on the ground plan of the palace in the 14th century.

There are two perimeter walls (western and northern) preserved from the palace today, along with the insufficiently explored construction of the eastern wing of the chapter, reconstructed in late Gothic style on the site of the Dom sacristy. Long-term restoration of the surviving remnants of the Roman masonry, together with comprehensive research and the essential architectural repairs, was completed in 1988. Since then, the monument has been open to the public. A documentary exhibition has also been prepared which also presents the results of the extensive archaeological surveys.

Directly next to the Romanesque palace is located the Chapel of St. Anne. This single-nave late Renaissance building with its five-sided apse used to serve as the location where the Olomouc bishops were elected. Its current form is partially determined by its older Gothic core but mostly by a major reconstruction carried out in 1617 by the chapter provost Martin Wenceslas of Greifenthal. As part of the regothization of the cathedral, the chapel was shortened by its final vault section in 1885, and its facade was dismantled and transferred to its current location, including the plastic decorative elements. The massive cylindrical Chapel of St.

Barbara rises from the Chapel of St. Anne. This Baroque building, whose dome dominates the northern front of Wenceslas Square, is an adaptation of the upper floors of the original circular Romanesque tower of the Přemyslid Castle. Dean Kaspar Florentius of Glandorf had it built before 1751 as his private oratory, accessible from the building of the chapter deanery. The site of the medieval castle itself is now occupied by the Baroque building complex of the former chapter deanery, designated as the headquarters of the Archdiocese Museum after the completion of the ongoing reconstruction. The last of the major monuments of the Dom Hillock are two plastic works – the freestanding Baroque statue of St. John of Nepomuk by Georg Anton Heintz and a cast of the late Gothic relief of Virgin Mary the Protector in the neo-Romanesque chapel on the corner of Wenceslas Square and Domská Street. 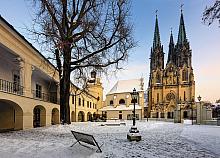 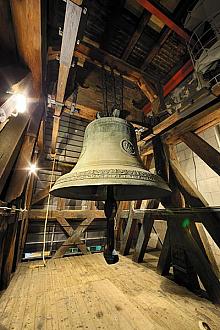 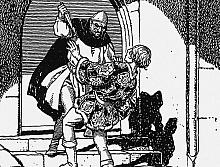 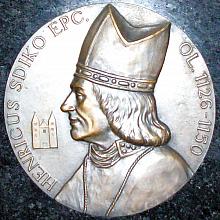 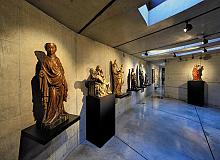 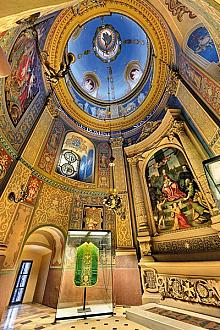 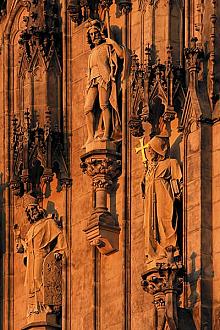