One of our most valuable buildings in the style of the Vienna Secession, it was built by Viennese architects Josef Tolk and Franz von Krauss for the Olomouc Primavesi family of bankers in 1905-1906. Paradoxically, the family owned the villa for only 14 years, since they left for Austria after the First World War. In the following years, the building served as a sanatorium, even after the 2nd World War when it was nationalized by the communist government. It was restituted to the descendants of its former owners in 1992.

The building’s uniqueness lies primarily in its interior. Its design was quite innovative in Central Europe at the time; the center of the house was the main living area, surrounded by the other rooms. This layout was known as the English hall system.

The interior furnishings are exceptionally valuable, since the Secessionist furniture (mostly from the Wiener Werkstätte community), wooden staircase, wall paneling, stained glass, and others have all survived.

The villa is not only a gem of fine arts; the house also includes a number of surprising technical achievements, such as an automatic central vacuum cleaner and its own power plant.

TIP: Even though the attic floors of the villa are currently used as apartments while other rooms are currently offices, part of the villa is open to the public. There is a gallery and a stylish restaurant which includes (in the summer) a lounge in the castle tower and a garden terrace. 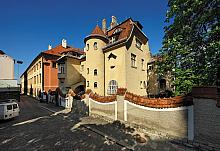 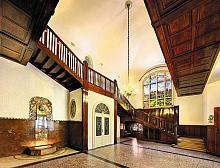