The youngest of Olomouc’s important works of ecclesiastical architecture, the Chapel of St. John Sarkander is the work of Eduard Sochor from 1908-1912. The neo-Baroque building, inspired by the Czech Dientzenhofer tradition, was built on the site of an older Chapel of All Holy Martyrs above the former city jail. The chapel had retained its underground apse, above which the architect built an elevated mass for a new building, topped by a cupola with a lantern. The lantern casts light through a circular hole in the floor to the basement onto the preserved relics of St. John Sarkander’s martyrdom.

Its position on the top of the Olomouc Hill, and especially its three distinctive cupolas on an octagonal tambour, make the Church of St. Michael a dominant feature of the Olomouc skyline, visible from afar. As the first Moravian domed architecture from 1673-1699, originally belonging to the Dominican Monastery, it was designed with the use of the older Gothic building by Giovanni Pietro Tencalla and later Domenico Martinelli from Vienna. The single-nave interior of the church is extended on the side with chapels and closed on the east by a diagonal presbytery.

One of the vaulted sections from the older medieval church has been preserved in the sacristy, as has the bell tower which was founded in 1482. A Gothic cloister is adjacent to the church on its southern side; it originally belonged to the Dominican Monastery and dates back to before 1380. This is the year to which the Chapel of St. Alexius is dated, accessible directly from the cloister. The actual monastery buildings were renovated in Baroque style at the turn of the 17th and 18th centuries, and their facades were enriched with a classicist columned portico designed by architect Anton Arche in 1842. 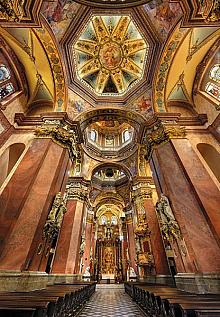