The castle in the village of the same name originated at the turn of the 13th and 14th centuries. Today’s appearance is the result of an extensive historical reconstruction at the end of the 19th century. Bouzov Castle is often sought out by filmmakers and others for its romantic appearance.

The city’s most valuable monument and landmark is the Baroque Archbishop’s Palace with its 84 meter high three-story tower. The palace, together with the Floral and Chateau Gardens, create a unique architectural ensemble which has been a UNESCO site since 1998. 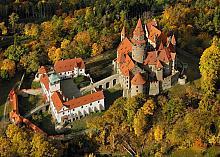