Olomouc today is the seat of the Regional Authority of the Olomouc Region, the Olomouc Archdiocese, Palacký University, the Olomouc High Court, and a number of cultural organizations as well as commercial and industrial firms and military institutions. Its cultural significance and tourist renown still primarily stems from the rich architectural heritage of the old town, the result of more than a thousand years of continuous development. The urban layout of the city’s structure combines early medieval traces of ancient trade routes, the Gothic parceling of key buildings, and landmark Baroque churches together with a large number of historicist buildings from the 19th century. Still, the Olomouc municipal heritage reservation offers more than monumental panoramas; it also beckons with intimate and picturesque corners, valuable Renaissance architectural details, and rare examples of neoclassical, secessionist, and functionalist architecture. As a whole, it represents an exceptionally authentic example of a layered Central European historical seat – this has also resulted in the city’s membership in the prestigious Alliance of European Cultural Cities (AVEC), associating the old continent’s unique historic centers. Olomouc’s importance has also been underscored since 2001 by UNESCO’s incorporation of its Holy Trinity Column into the World Heritage List, a rare monument of Baroque sculpture and urbanism from 1716-1754. The historical and cultural image of Olomouc is documented and elaborated upon through several specialized institutions, including the National History Museum in Olomouc, the Museum of Modern Art, and the Archdiocesan Museum. While the National History Museum in Olomouc manages a historical collection and natural science collections, the Museum of Modern Art focuses on exhibitions of older and contemporary works of art. A substantial part of the Art Museum is the Archdiocesan Museum with its collection of portraits of Olomouc archbishops; another historic building is under reconstruction for this collection, the Baroque residence of the capitulary dean in the nearby St. Wenceslas Cathedral.

On the Upper Square there stands Olomouc’s permanent theater, the Moravian Theatre Olomouc, featuring drama, opera, and ballet. Other theaters include the Tramtárie and Theatre Na Cucky. Olomouc cultural life continues with the Moravian Philharmonic Orchestra, the chamber Music Theater in the building of the Museum of Modern Art, and the city’s Metropol cinema, which holds regular club performances for more demanding film audiences and broadcasts from the Metropolitan Opera in New York. Thanks to the visions of the city’s 19th century planners, the old buildings of the historic center are now surrounded by a ring of municipal parks which were originally an open area in front of the Olomouc city walls. After the demolition of most of the Baroque fortress, three promenade alleys were gradually created, a botanical garden was established, and a series of greenhouses and pavilions were built, now the venue for the annual flower exhibitions Flora Olomouc. The northern edge of the city blends in with the original floodplain landscape of the Morava River, now the Litovelské Pomoraví Protected Landscape Area, which is interwoven with a network of cycle paths and is a popular summer recreation site. The historical overview of architectural styles is topped off by a colorful picture of wildlife – the Olomouc Zoo on Holy Hillock and the pilgrimage church are other popular day trip destinations for residents and visitors alike. 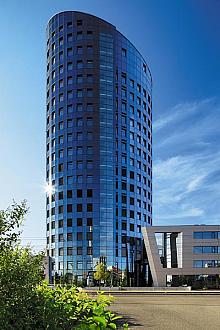