The city’s fortress goes back to the 11th century in connection with the construction of Olomouc Castle. The city walls were substantially expanded during the first quarter of the 16th century. In 1655, Olomouc was declared to be a provincial fortress by Emperor Ferdinand III. Before the middle of the 18th century, a bastion fortress had been built on the decision of Empress Maria Theresa, who later had the city of Olomouc rebuilt into an imperial fortress. A mere one year after its completion, the city was besieged by the Prussian army in 1758. Tens of thousands of cannon balls, mortar shells, and grenades fell on the city, but the fortress held strong – on July 4, after 36 days of siege, the Prussians left empty-handed. Less than 100 years later, the wreath of forts around the city was completed. Demolition of the bastion fortress began in 1876, and 1886 Emperor Franz Joseph I finally canceled Olomouc’s status as a fortress town. 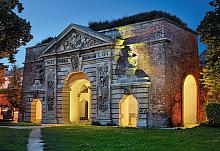